The original Norman Church on this site which probably covered the same area, but of which only a few have been found, is known to have been built by William d'Evreux, around 1100. At the time of the Domesday Book in 1086 he held the manor of Poteslepe as a feudal tenant of Roger de Lacy who had been granted large tracts of land in Herefordshire. The Domesday entry reads "The same Roger holds Poteslepe. And william of him.Tostin held it. There is one hide geldable.(ie. liable to tax.) On the desmesne are two ploughs and there are two villeins and one border with two ploughs.There are two serfs there. It is and was worth twenty shillings". William gave the patronage of the benefice to the Dean and Chapter of Hereford Cathedral.

Unusually the North doorway, now blocked, appears to have been the original entrance to the Church. Much of the original Holy water stoup is visible to the East of the blocked door but the stoop itself has not survived. This would have been used by the congregation entering the church. The south doorway was probably constructed in either the 13th or 14th century. The Porch was Elizabethan and this survived the reconstruction but, despite having been said to have been in reasonable condition in the 1940's, had finally to be replaced in 1958. The present porch is a modern replica of the original.

There was a priest's door on the south side of the chancel and this was rebuilt into the new chancel wall. It is visible from outside but is now a false door.
At the east end of the Church, on the south of the chancel, are the columns and stones of the Norman piscina, used for cleaning the alter vessels. These were found, at the time of restoration, built into the south chancel wall and therefore completely hidden. They were replaced in the supposed original position.
The Nave windows nearest to the chancel are originals as is the one on the north side of the chancel itself.
Roman tiles are visible amongst the material used to block the north doorway. At the top of the door is a fine Norman carving of a head.

Our first Church Register was started in 1561 and runs until 1799, the first entries being made by Revd. James Mutlow, who was Rector from 1562 to 1616, holding the living longer than anyone, before or since. Unusually we also had a long serving Rector, Revd. Goodwin, who served from 1640 in the reign of Charles 1st, through the Commonwealth period to 1663 after the Restoration. Was he a "Vicar of Bray" who could change his views and adapt to the Prayer Book or to the puritan Directory? Or was this small country parish able to retain its rightful priest throughout? As our Church Registers recorded Baptisms continuously from 1649-1660, whereas in many other parishes only Births were recorded, the latter seems possible.The fine Jacobean panelling of the Rood Screen and pulpit had previously formed the squires square pew that can be seen in the Architects Drawing (below).

There are three bells. the Revd Evans, in his 1942 history of the Church, noted that the smallest was reputed to have been cast in Bristol as early as 1400 and if so it has rung out over the same fields for some 600 years. The largest bell dates from 1636, just before the English Civil War. The third is dated 1722. 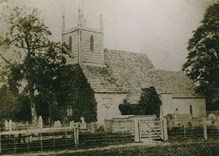 buildings such as Pusey House or St Magdalen, Oxford. Where there are rural examples, such as at Highnam near Gloucester, they are estate Churches. Mr John Riley, who purchased Putley Court in 1872, contributed £1000 towards the cost, the Dean and Chapter of Hereford, £400. The incorporated Church Building Society contributed £20 towards reseating upon condition that all seats except five in the Putley Court pew be set apart for free use of all the inhabitants". The architect employed to oversee the restoration was Mr Thomas Blashill of Old Jewry Chambers in London.

The church plan before and after restoration 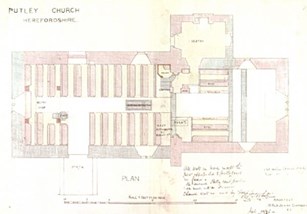 The alabaster Altar itself which represents the Deposition of Christ was given by Mr John Riley in memory of his mother and is so inscribed on its south side. The wooden table previously in use as an altar is incorporated within it. The Reredos, the Memorial Altar and the Choir Stalls are the work of London stone carvers, Messrs Farmer and Brindley.

The original box pews were replaced by smaller ones in 1892 and these were in turn replaced by the present oak pews from 1908 onwards. The pew ends were carved by John Riley and his son and daughters and represent plants, beasts, and birds appropriate to the country life in a fruit growing parish. The last pew was completed in 1918 and its pew end carving, the dove, was to commemorate the return of peace. 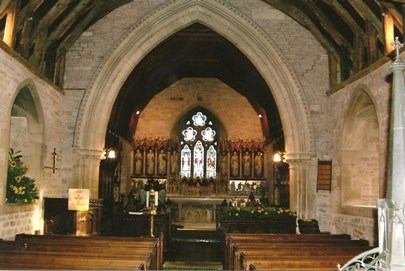 Sunday Services are held every week at 9:30 am 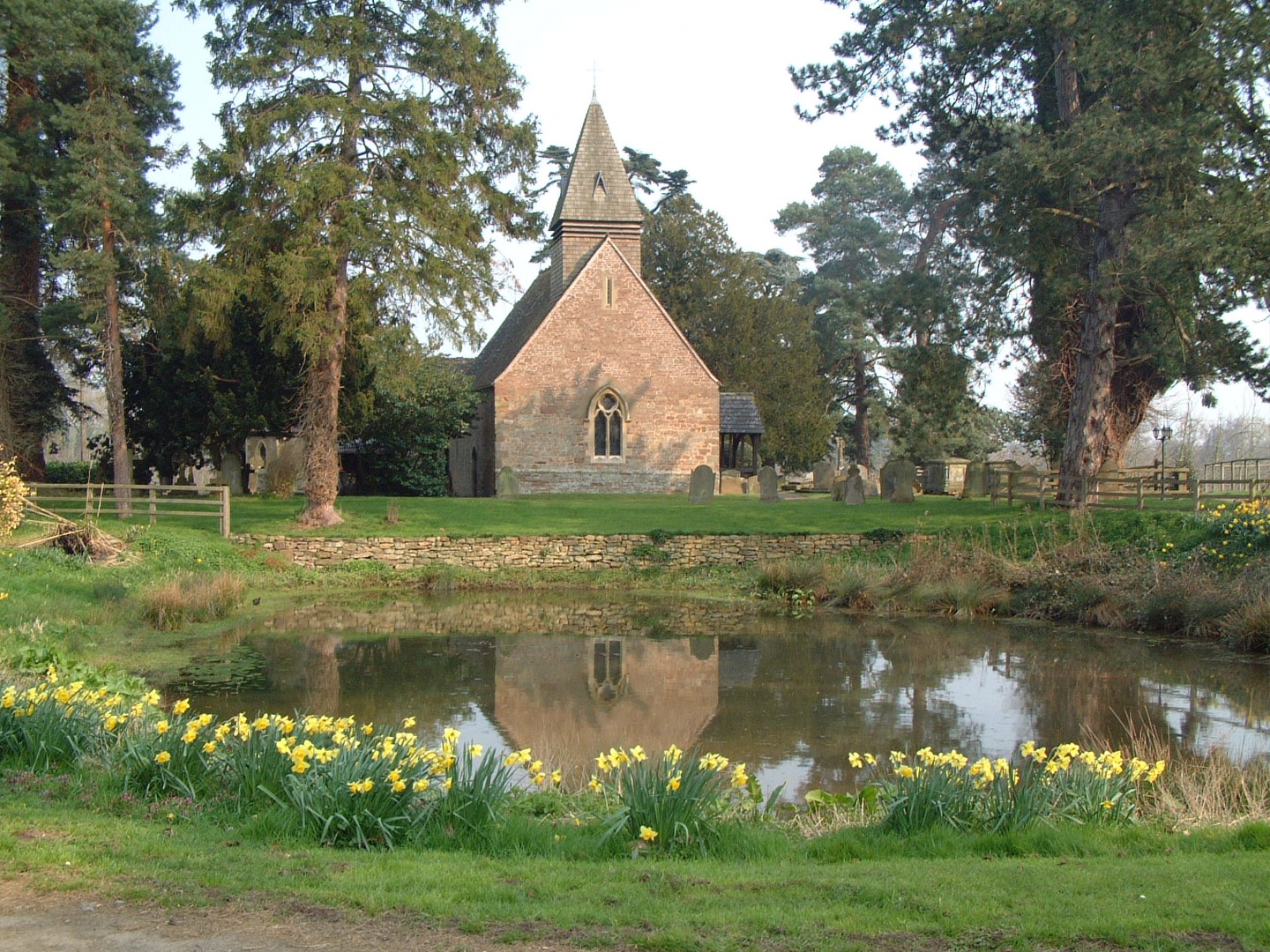 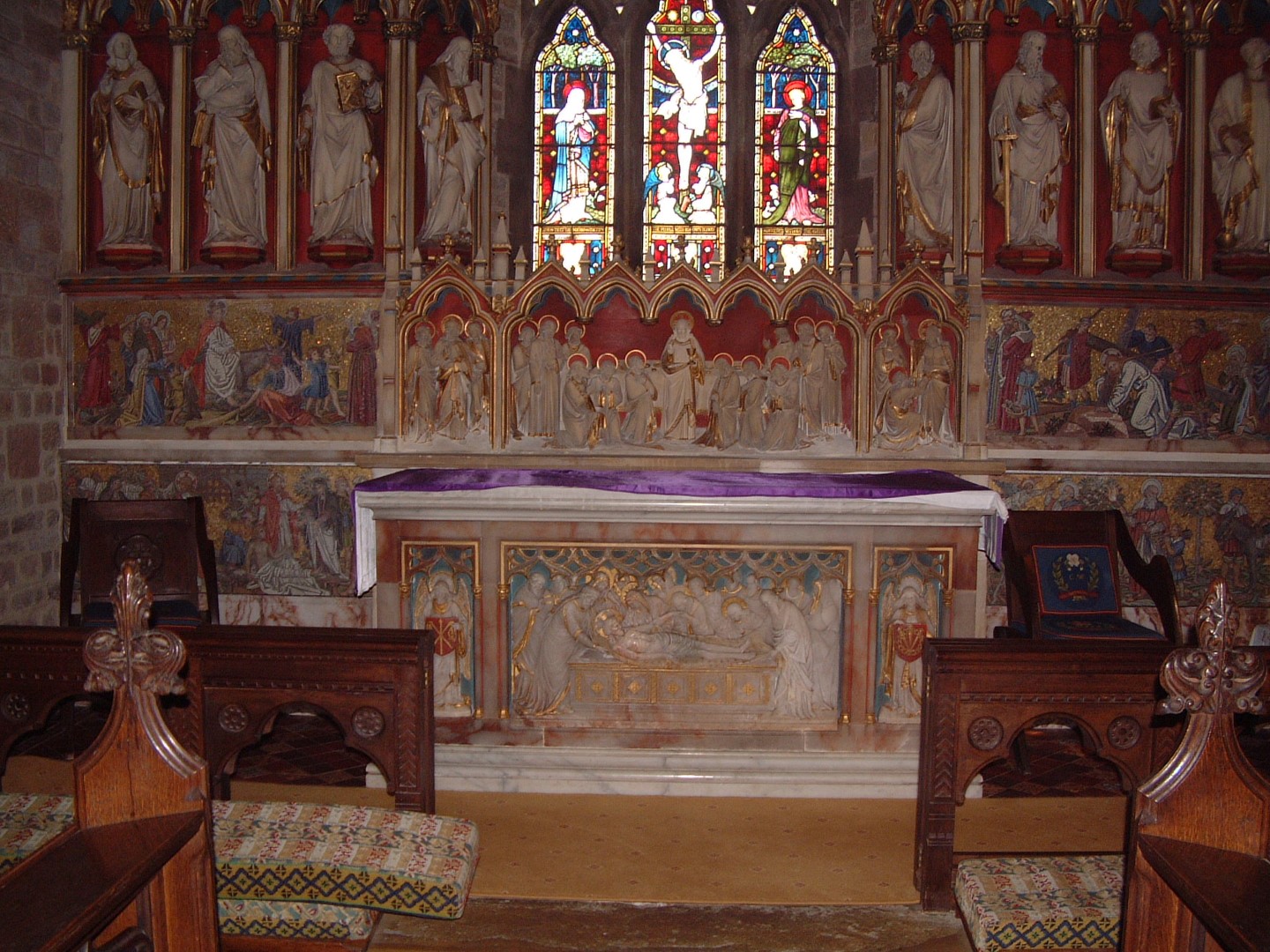 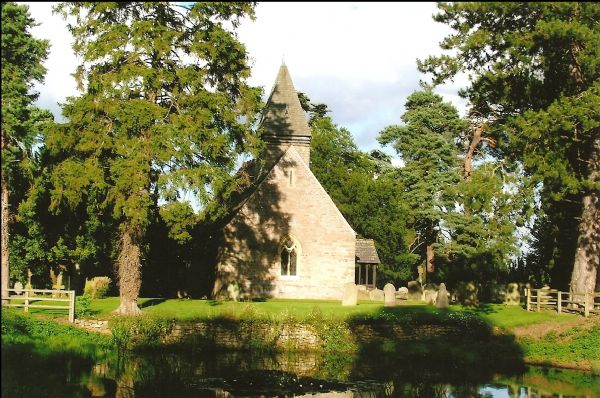