Putley is a small scattered village, rich in history. The little Putley church shown in the home page was largely rebuilt in 1875 by John Riley, the then squire but still contains important vestiges of the original church built by William De’Evreux, one of William the Conqueror’s knights including the charming Norman piscina at the East end. The 14th century churchyard cross with its magnificent carvings is one of the finest in the county.

The Roman artefacts uncovered during the church hark back to the early importance of agriculture as well as Putley’s strategic position close to the Roman road (now the A1472). The Hereford Domesday Book, a copy of the original Domesday Book, used as late as the reign of Edward 1st, corrects in the margin the spelling of Putley from Poteslepa to an almost modern Putterlee. A “lee” is a wooded glade. A “Putta” who lived in the 7th century is said by Anglo Saxon historian Bede to have re-established Hereford Cathedral. Perhaps there is a connection here.

No fewer than 21 of the houses of Putley were considered by the 1932 Royal Commission for Historical Monuments to have 17 century origins. At least one house, the Lacons, is medieval in origin perhaps belonging to a priory associated with St Peter’s Abbey Gloucester. The village contains two fine squire houses, Putley Court and Brainge, both built in the reign of Queen Anne at the beginning of the 18th century.

Putley is famed for its beautiful apple orchards and is visited by many each year as part of the Big Apple festivities. Fruit production has a long history. Quality fresh fruit production was pioneered by Squire Riley of Putley Court in the 1880s; there was a growing demand from the increasing population in the urban areas and the newly constructed railway system provided the effective cheap transport to satisfy this. From Victorian times until the Beeching cuts of the 1960s the fresh fruit was dispatched to market from Ashperton station. Putley remains in the forefront of modern marketing; some Putley orchards produce organic fruit, Fosbury fruit farm has its own modern cold store; Dragon Orchard markets superb quality juices from different old established varieties of fruit and runs special “cropsharer” weekends.

However the commercialisation of orchards long predates the railway and Squire Putley. Putley and the surrounding villages were renowned for cider and for perry right back in the 18th century. This was not just Herefordshire farmhouse cider for local consumption but included “fine" quality which sold in London and other major cities for a price high enough to compensate for the isolation of Herefordshire from the main markets and the high cost of transport. Cider from the merchants in Ledbury was moved by pack horse or cart by notoriously bad roads to Gloucester and thence by sea to the principal markets.

Given the importance of cider in the past no wonder so many of the houses of Putley still retain their cider mill. Most commonly this is used as a garden decoration. There are, however, at least two instances when these cider mills are still in their original locations. Do you have one in your garden or outhouse? 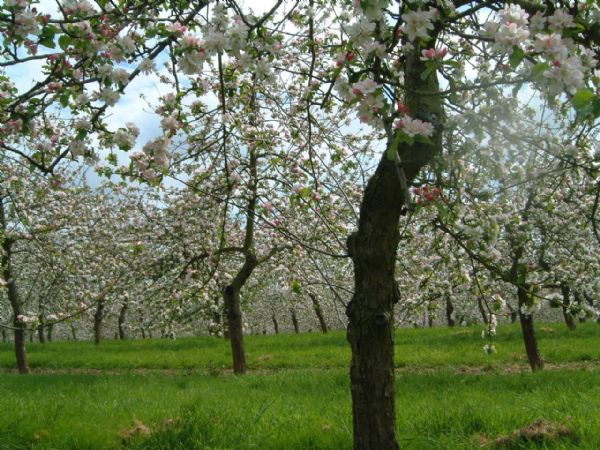